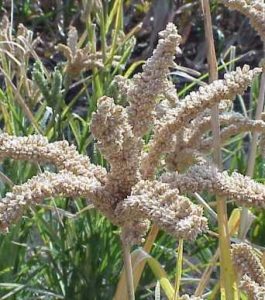 Common Name: Finger Millet
Description
Eleusine coracana is an annual plant widely grown as a cereal in the arid areas of Africa and Asia. Earliest records of its cultivation in India show that it was cultivated in the Hallur region of Karnataka in the later Iron Age. It remains one of the main ingredients of the staple diet in Karnataka.It is commonly known as finger millet, African finger millet, red millet,[citation needed] caracan millet, koracan. . . .Read more