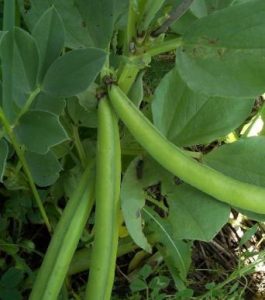 Common Name: Favabean
Description
Vicia faba, also known as the broad bean, fava bean, faba bean, field bean, bell bean, English bean, horse bean, Windsor bean, pigeon bean and tic(k) bean, is a species of flowering plant in the vetch and pea family Fabaceae. The origin of this legume is obscure, but it had been cultivated in the Middle East for 8,000 years before it spread to Western Europe. Fava or Broad beans have been found in the earliest human settlements. Remains are reported to have been found in Egyptian tombs.[citation needed] They probably originated in the Near East during the Neolithic Age and by the Bronze Age had spread to Northern Italy. They have been found in lakeside settlements in Switzerland and in Britain at Glastonbury. In Egypt, the beans were considered commoner food and were shunned by the upper classes. Fava beans were cultivated by the Egyptians, Greeks and Romans. In ancient Rome, they were used in funeral rites. Pythagoras forbade the eating of fava beans because they contained the souls of the dead. This once forbidden  . . . . .Read more