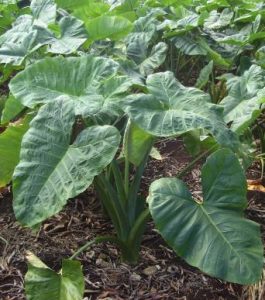 Common Name: Elephant ears
Description
In Bolivia, it is called walusa, in Colombia bore, in Costa Rica tiquizque or macal, in Mexico mafafa, in Nicaragua quequisque, and in Panama otoe. In Brazil, the leaves are sold as taioba. The tuber (called nampi or malanga) is also used in the cuisine of these countries. The plant is often interplanted within reforestation areas to control weeds and provide shade during the early stages of growth.
In Puerto Rican cuisine, the plant and its corm are called yautia. In Puerto Rican pasteles, yautia is ground with squash, potato, green bananas and plantains into a dough-like fluid paste containing pork and ham, and boiled in a banana leaf or paper wrapper. The yautia corm is used in stews, soups, or simply served boiled much like a potato. It is used in local dishes such as guanime, alcapurrias, sancocho, and mondongo. In alcapurrias, it is also ground with green bananas and made into fried croquettes containing picadillo or sea food. Yautia majada . . . . .Read more