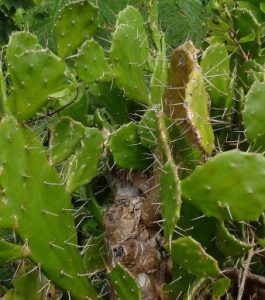 Common Name:Prickly pear
Description
Opuntia monacantha, commonly known as drooping prickly pear, cochineal prickly pear, or Barbary fig, is a species of plant in the Cactaceae family. It is native to Argentina, Brazil, Paraguay, and Uruguay and is naturalised in Australia and South Africa. Its natural habitats are subtropical or tropical moist lowland forests and sandy shores.
The species was first formally described in 1812 by botanist Adrian Haworth in Synopsis Plantarum Succulentarum. The name Opuntia vulgaris, which is a synonym of Opuntia ficus-indica, has been misapplied to this species in Australia.Read more