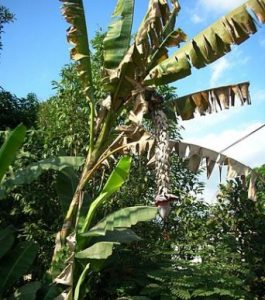 Common Name: Bananas
Description
Musa balbisiana is a species of wild banana native to eastern South Asia, northern Southeast Asia, and southern China. It is one of the ancestors of modern cultivated bananas, along with Musa acuminata. It was first scientifically described in 1820 by the Italian botanist Luigi Aloysius Colla. It grows lush leaves in clumps with a more upright habit than most cultivated bananas. Flowers grow in inflorescences coloured red to maroon. The fruit are between blue and green. They are considered inedible because of the seeds they contain. It may be assumed that wild bananas were cooked and eaten or agriculturalists would not have developed the cultivated banana. Seeded Musa balbisiana fruit are called butuhan (‘with seeds’) in the Philippines, and kluai tani in Thailand. Natural parthenocarpic clones occur through polyploidy and produce edible bananas, examples of which are wild saba bananas. . . . .Read more